In the loving memory of Shri BP Goyal, Jindal Stainless Limited recently named the Hot Pickling Line of the Jajpur plant as the BPG Line. This is a small gesture to commemorate his relentless devotion and passion towards his work. Mr Goyal was a man who led by example, and we salute his spirit, which will continue to inspire us in the future. Here’s an ode to the man who has been an integral part of our journey and an attempt to recount his many acts of brilliance.

Mr Goyal was born to a middle-class family in Ladwa, Kurukshetra. He completed B.E. in Electrical Engineering from Punjab Engineering College, Chandigarh, and started his career there as a teacher. After a few months, he got into the Durgapur Steel Plant in 1963 as a GET, where he served till 1974. Later, he moved to Mecon Limited, Ranchi where he worked in the rolling mill till 1993. Just before joining Jindal Stainless, he worked with Roadmaster Industries India Limited, Rishikesh for two years. A man with a heart of gold, Mr Goyal was always available to lend an ear of empathy to laborers regarding their day-to-day concerns and helped solve various issues related to their wellbeing. The tears shed by the laborers at Roadmaster when Mr Goyal left his job are testimony to the special place he had earned in the hearts of all workmen.

His Association With Jindal Stainless And The Journey Thereafter

Mr Goyal joined Jindal Stainless in 1995. He was initially associated with a rolling mill project before moving to Hisar in 1997. His untiring zeal led him to pick up the responsibility of Hisar’s cold rolling expansion project. Soon thereafter, he was managing operations along with his initial duties. During this period, he introduced the concept of coin blanking in Hisar. Undeterred by the risks involved in this dynamic job, this undefeatable man flagged off the project in 2001. After 17 years, today JSHL is one of the leading industries in coin blanking.

In 2004, he moved from Hisar to Delhi but continued handling the mother plant. In Delhi, he was also actively involved in the Jajpur plant’s commissioning. From land hunting to liasioning, from water and energy supply to purchase of machinery, he contributed to everything. He eventually moved to Jajpur in 2007, after spending another year at Hisar in 2006. His invaluable contributions during his stint in Jajpur between 2007 and 2011 are permanently etched in the history of the plant. He led the phase one of commissioning of the ferro-alloys plant, power plant and cok

e oven in Jajpur. Later, he was involved in CRM projects and played a crucial role in the erection of HSM and SMS.

Health Issues And His Undying Spirit

With an immortal spirit, he kept moving up the professional ladder. Life, however, is unpredictable. He was diagnosed with blood cancer in 2011, which forced him to take a break from his illustrious career. However, he returned to office in 2017 because he just could not stay at home and do nothing. He often said, “The body is becoming frail, but my mind is still fit”.

Master Of All Trades

Mr Goyal knew 6 languages! He could speak English in various accents. He was so fluent in the Bengali language that many people mistook him for being a Bengali. He was an expert in negotiating as he cracked every deal with skill and tact.

His dear colleague, Mr Pawan Garg recalls, “He used different tactics with different vendors. His convincing skills were commendable. He used to segment prices amongst vendors. He had the capability to handle 20 vendors at the same time. I remember that once in a roll assembly in Jajpur, he used the materials from 8 different vendors in one machine.”

He was an expert in ‘reading between the lines’. He sorted material critically. His memory was so sharp that he barely used a laptop. He remembered every data and every detail down to the last digit. He never needed to write an email to get things in order. He believed that computers decreased our work efficiency and memory, and that we have become increasingly dependent on technology for our day-today work.

Another colleague, Mr G P Gupta says, “I remember an incident from when we were in Gurgaon in 2008. We were doing some repair work in the lines and Mr Goyal was doing the modification. He asked me to take data from the previous line which he started in 1999. I knew how good his memory was, so I didn’t want to take the risk of sharing incorrect data. After several cross-checks, I handed over the data to him. After a cursory glance, he asked me to re-check it, and voila, there was a mistake. Such was his proficiency in technical and commercial data.”

A Leader For Life And Beyond

Mr Goyal expected a lot from employees and could not tolerate mistakes. But those who knew him knew that he had a soft heart. He was known for his outspoken and straightforward nature when it came to work. The moment anybody entered his room, his intuition would guide him to know the exact topic of discussion. He was confident about his decisions and was a risk-taker who never hesitated to take on new responsibilities. Mr Gupta recalls, “One day, when I was in Hisar, he called me to his office. In between a discussion with a lot of officials, he asked me to cut down the tension level of the mill. At that time, I did not understand what he was talking about, but I did not dare to ask him. While coming back to my office, I realized that he had just solved the problem that I had been facing for a long time. This is how accurate his memory was.”

As A Family Man

Free from all vices, his only weakness was his family. He was extremely fond of his grandchildren, and was often found playing with them or sharing life lessons with them.

His wife, Mrs Sudesh Goyal says, “His work was his passion. He kept traveling and rarely stayed at home, but he was always connected with us. He gave good morals and values to his children and was always helpful and supportive of their endeavours. His energy and dedication towards his work made him different from others. He was the true example of a man who infused passion into all aspects of his life.”

His elder son, Mr Navin Goyal says, “He was an extremely helpful person. As a father, he never said no to anything, and in fact he encouraged us to take on any feat that came our way. He was truly a complete family man. His room was full of books. A big Dev Anand fan, he spent most of his leisure time listening to old songs.”

Head CRM – Jajpur, Mr Deepak Agrawal recounts, “He had a notable impact on my professional carrier and on various aspects of my journey so far, in one way or another. A tough person, a task master, a perennial critic, someone who never really grew old! His smile was made of sunshine, and his heart was solid gold.” On March 11, 2018, Mr Goyal bid farewell to life. His memories will find a warm place in the hearts of those who knew him! 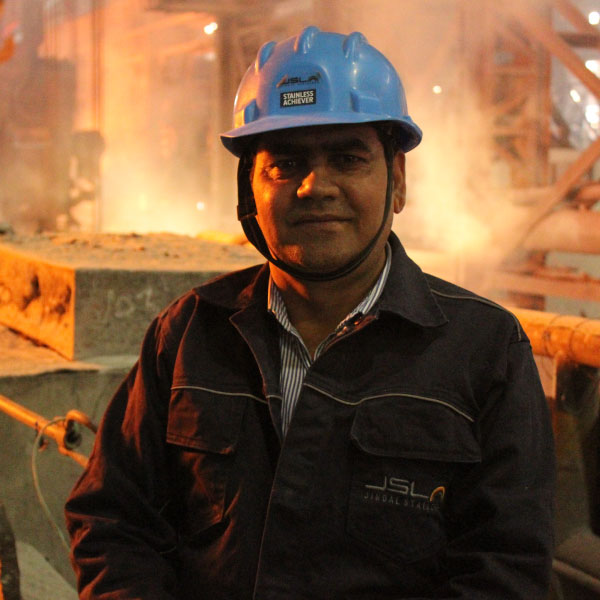